Referring to Hue, people think about Huong river, Ngu Binh mountain or historical architects of palaces and temples and Hue traditional food. Banh Beo Hue is quite unique, it is put into a small bowl which has a very traditional pattern.

The Hue likes the traditional cake on snack. Banh beo is made simply: powdered rice soak into water for several minutes to have liquid. Then, mix with a little grease and pour into small cups. Enjoying banh beo properly is in each small cup, not in the bowl or plate as some restaurant, hotels.

The delicious banh beo is thanks to the shrimp, especially the sauce. Firstly, nuoc mam mixes with grease, sugar, garlic, chilli and shrimp which create the unique flavor. When eating “banh beo”, people not use chopsticks but small bamboo stick. It is great when using it with spicy sauce. The sweetness of shrimp mixed with the flavor of garlic, chilli… gives us unforgettable impressions.

In contrast, in the south of Vietnam, Banh beo is thicker and served in a plate which is formed a round shape. The spices of the South is not as diverse as Banh beo Hue.

The name Banh beo makes us image something very poor and simple, because in Vietnamese Beo is a kind of plant which floats on the river, referring to wildlife and no settle place. Perhaps, the shape of banh beo looks like a “beo” leaf , no one knows exactly where and when it comes from. Banh beo has been existing in every party, every meal of Hue people and become an inevitable part of Hue’s life. 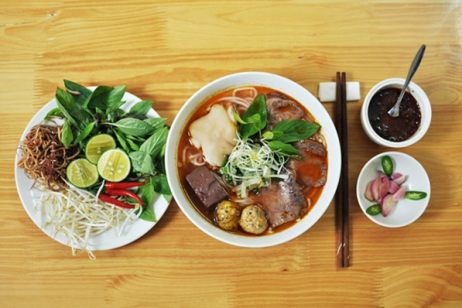